On 17 July, in defense to Chua Tee Yong’s shocking exposure on the bank interests of RM86 million incurred by Permodalan Negeri Selangor Berhad’s (PNSB) to rescue Talam, Tony Pua had confidently argued that PNSB is capable of undertaking RM230 million in loans and incur the astronomical interests for the land acquired from Menteri Besar Incorporated (MPI) because its financial position had improved after 2008.

This explanation by Tony Pua may convince some people on the street but for the people with financial knowledge, this is a big joke to them.  Tony has obviously made the mistake of presumption.

The first fallacy of presumption by Tony Pua is that a company or in this context PNSB could obtain a sizeable loan of RM230m simply because it is recording profit.  This remark has become the joke of the year to the financial people. Tony must learn that the primary factor the financial institutions consider in giving out loans is the strength of cash flows of the company and not the profitability.  The basic accounting knowledge tells us that a company with profitability may not have the ability to repay the bank borrowing and interests as profitability is never equal to the cash flows.

Now, let’s take a closer look at the audited cash flows generated from operating activities by PNSB for years 2007-2010:-

##  Based on the audited accounts 2010, the seemingly strong cash flows generated in year 2010 is contributed by RM431.7m advance from State Secretary, Selangor (incorporated) in the same year. Removing this exceptional item, there was actually negative cash flow of RM8.2m in operating activities in year 2010

By referring to above, it is clear that contrary to what Tony Pua has argued, PNSB could not afford to borrow RM230m loan from any financial institution on a clean basis in view that there is no consistent cash flow generated from its operations to service interest as well as for future repayment of principal.

What Tony Pua has failed to do in his defense of the RM1 bil fiasco is to disclose to public what and how much assets exactly has been pledged by the Selangor Government to the financial institution to obtain the loan of RM230m.

Last week, Tony Pua has cited PNSB’s balance sheets obtained from the Companies Commission of Malaysia (CCM) and showed that the state subsidiary had total assets of RM761 million and RM823.8 million in 2010 and 2011 respectively, compared to those of 2008 and 2009, which stood at RM111 million and RM115 million, when he is comparing total assets in 2010-2011 to total current assets for year 2008-2009! (please note that in elementary accounting, total assets consist of total current asset and total non-current asset).

After being pointed out by MCA Chua, Pua admitted that he did read the wrong line of PNSB’s balance sheet to make his claim. But he asserted that that does not negate his argument that PNSB was in better shape under the Pakatan Rakyat government’s rule.

However, What Pua failed to realize is that he has committed the sin of reading and plucking figures without analyzing them.  To put it plainly, he never used his brain when referring to figures to support his claim.  Anyone with common sense would have pondered on the alleged significant increase in total asset, wrongly computed as RM700m or 800%  increase in a span of 3 years from 2008 to 2011, and would have noticed the error and made correction before making any conclusion.

It is a shame when he still refuses to admit he lacks the “thinking” skill and instead shamelessly and arrogantly challenging Chua to a debate!

Instead of apologizing to the people on his mistake of misleading public, he made another joke on 20 July 2012 to the people with even little financial knowledge.

This is not only another absurd statement made by Tony Pua when referring to PNSB’s profitability but, more than that, an insult to the intelligence of the people with even little financial knowledge.

One wonders whether this is the joke of the year 2012.  For his information, any purchase of land cannot increase a company’s profitability immediately as it is a balance sheet item. Profitability of a company is neither measured by the value, size of land nor the number of land purchased. The profit of company will increase only if the land can be successfully developed where the revenue derived from the development exceeds the total cost of development including the cost of purchase. However, in very rare circumstance, if the purchase value turns out to be over and above market value and is therefore subject to impairment, then it will reduce profitability immediately even before the land is developed.

It is surprising to note that Tony Pua has also claimed credit that after Pakatan took over, PNSB’s cash assets were higher when there was actually a dubious advance of cash amounting to RM431.7m from State Secretary, Selangor (incorporated) in year 2010. Was it for rescue of PNSB’s cash flows?

What Tony Pua ought to do during the forum next week is to explain on the purpose of the advance, how was it funded by State Secretary, Selangor and how PNSB plans to repay.  If there is still no proper explanation this time, he will be more like the Joker who thinks he can fool the people on the street rather than playing the role of the batman in the Dark Knight rises. 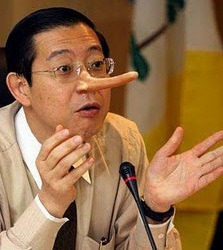 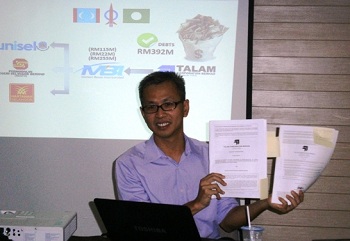