Lies, lies, more lies, deceit and more deceit and inconsistencies are some of the ugly side of things that have surfaced from the RM1 billlion “underwater” land scandal involving the Pakatan Rakyat Selangor government and Talam Corporation Bhd.

Not only that quite a number of plots of land, some spanning as large as 250 football fields have been found to be underwater, they are also overpriced, some not usable as they are of a certain gradient while others have been gazetted for forest reserves and ecology.

There are many questions surfacing from this deal which until today Mentri Besar Khalid Ibrahim is rather blur or hazy about the whole situation.

His explanation, instead of clarifying or clearing doubts, further fuel suspicion of conspiracy of great proportions. Why is Selangor government bailing out Talam, a developer of bad reputation, with many abandoned projects to its record.

Then we have Tony Pua, who has booted out Anwar Ibrahim as Selangor’s economic adviser and even admitted that the state had overpaid Talam in one of the deals.

The failed economist conceded Selangor had overpaid RM41 million for a piece of land from Talam during a debt recovery exercise in 2010, confirming an allegation by MCA’s Datuk Chua Tee Yong that its exercise to recover a RM392 mil debt from Talam ended in scandalous deals worth over RM 1bil.

Despite the acknowledgment, Tony stressed that the state had ultimately underpaid the troubled property developer by RM9.1 million for the acquisition of 13 plots of land and assets.

His explanation is that the state has measured the combined value of 13 pieces of land and assets acquired from Talam to be RM676.1 million.

And based on Talam’s independent valuer Mitra Valuers & Property Consultants Sdn Bhd, the 13 parcels of land and assets were valued at RM685.2 million.

Indeed Tony’s calculation is right but coming from an accounting background, he seems amateurish in interpreting that Selangor had actually benefited by paying at a discount of RM9 million.

HOW CAN IT BE.  It is most ridiculous and incredulous to argue based on that point that the Selangor government saved RM9 million.

Firstly let me ask Tony step by step since he seems to be a bit blur on the Talam issue.

If Selangor evaluated the assets at RM676 million, they should have rightly bargained for less. Why should Selangor be satisfied by merely comparing their own evaluation with that of Talam which quoted a price value of RM685 million for the assets which were pledged.

Isn’t it obvious that in any transaction, the seller would have got a higher valuation for their assets in their bid to get a better price. Moreover Talam’s valuer Mitra Valuers is unheard off and is not a big name in the market. Its credibility is questionable as well.

Then Selangor for that matter, should not be satisfied with a mere difference of RM9 million. And the difference could not be construed as a discount as what Tony Pua had claimed.

Tony, the con accountant, had merely created a perception that there was a RM9 million discount based on the difference between Talam’s evaluation and that of the Selangor government.

Until today, the explanation from the Selangor government seems to be sketchy and lacked details. They don’t seem to be on top of things.

One thing for sure is that they had failed to table the White Paper as promised two years ago, which gave rise to their attempt to sweep things under the carpet until Chua Tee Yong made revelations of the scandalous way the debt recovery exercise was carried out.

In July, 2010, the Selangor state government pledged that a White Paper would be presented at year end but until today, we have not seen the light of such a paper being presented.

However there seemed to be more inconsistencies than clarification on the part of the Selangor government.

A classic inconsistency case came from Mentri Besar Khalid Ibrahim who when fielding questions at the recent state assembly said that the state government’s investment arm, Mentri Besar Incorporation (MBI) had amassed more than RM300 million from the amount Talam owed to them.

He was responding to a question by Mohd Shamsudin Lias (BN-Sungai Burong) who asked about the exact amount the state government had collected from Talam.

However in an interview with the Malay Mail, Khalid said : “We did not pay Talam a single sen in this process (debt settlement  exercise) and the company, too, did not pay us in cash. They paid in the form of assets,” he pointed out.

What rubbish is Khalid talking about. At the assembly he is saying one thing and in an interview, he is saying another thing.

If he had said that the state had amassed more than RM300 million, where is the money now? Please stop all the lying and give the rakyat the full facts of the debt settlement exercise.

Another big lie coming from Khalid is his claim that Selangor did not purchase any land which was underwater in Bestari Jaya.

He had told Malay Mail “Permodalan Nasional Selangor Berhad (PNSB) only decided to buy the part of the land that was not submerged at a price of RM80,000 per acre. It did not buy the land that was underwater,” he said.

WHAT A BIG LIAR. Documental evidence shows the purchase of 2,263 acres of land in Bestari Jaya was at RM181 million, of which 438 acres of the land is underwater.

The total cost of filing up the 438 acres is an additional RM65.7 mil.

Then there is also other underwater land that has been purchased.

The four plots of land in Danau Putra which was purchased by Selangor government from Talam at RM87.7 mil shows that 80 per cent of the land is submerged in water.

The money paid for these lands are the taxpayers money and the Pakatan Rakyat Selangor government should come clean with a good explanation and not be a Penipu Rakyat. 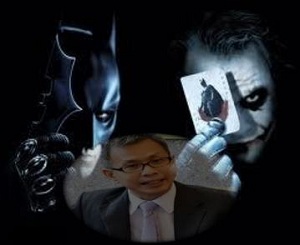