Merdeka Centre is another vehicle that Pakatan Rakyat is riding on to get to Putrajaya. Some call it a think tank but we prefer to call it a spin tank because that is what Merdeka Centre is doing for its PR master and client. Surveys and polls done by the so-called think tank are aimed at twisting people’s mind and opinion about Umno, BN and Najib. Their chief target is Najib because he is the big factor standing in the way of PR winning big in PRU13.

Every now and then, the spin tank releases its polls – Najib popularity down, Najib rating up, Najib down, Najib up. Like playing computer games, you know. They are trying to psycho Malaysians into believing that their survey is real and professional. Then when election is announced, wham! A new “survey” will be released to say that Najib popularity down, going to lose, kaput. All a mind game to control the views and thinking of voters out there, to create an impression that PR is on the way to power.

Merdeka Centre’s chief client is the PR government in Penang and Selangor. The spin tank conducts periodic polls for Lim Guan Eng and Khalid Ibrahim for big bucks. It monitors public opinion about the two state governments and the leaders in the states. Yet have you ever wondered why they don’t release information about the two states and their MB and CM?

How about showing us some opinion poll on PM to be Anwar Ibrahim? Why no poll on Anwar after sex video incident? After every Bersih protest there will be a poll on Najib up, Najib down. We would love to know what Malaysians think of Anwar Ibrahim after Bersih 3. Of Nizar Jamaluddin, after www1 incident. Of what Penangites thinks of Lim Guan Eng after the death of the hills. Of Ambiga, after the street violence. So unprofessional and biased!

Well, let us tell you why. One of the client instructions to the spin tank is to twist and distort the image of Najib and Umno. They have done that very well in the last three years. They also have lots of information about Lim Guan Eng and Khalid Ibrahim. Unfortunately, the polls on these two leaders have been showing negative results – down, down, down. The popularity rating for them was at an all time high after March 2008 but it has been slipping about one fiasco and scandal after another. That is why they cannot release info about their clients. If it is a really professional think tank, it should release information of leaders whether PR or BN. Why target only Najib?

The spin director of the spin tank is Ibrahim Suffian who has just returned from America where he was given a grant by the US government (read CIA) to do a course and give talks to American officials. He is the man who Umno blames for wrongly advising Sleepy Abdullah to call for early elections in 2008. Mr. Sleepy had commissioned Merdeka Centre to do a survey and based on the survey results, Mr. Sleepy decided to call for election even though he still had a full year to go. Let’s just say Mr. Sleepy sleepwalked into the trap.
After that, the BN did not want to have anything to do with Merdeka Centre. Since then, Ibrahim Suffian has become more than just a spin doctor for PR. He has become an adviser to the PR and he had a big say on some of the candidates in the string of by elections after 2008. That is how big a political player the spin doctor has become in PR. We hear he is the one advising them not to hold the state elections if Najib called for PRU13.

In America, every political party has their own think tank. Merdeka Centre is PR’s spin tank. Well done Merdeka Centre! You have served your masters very well. 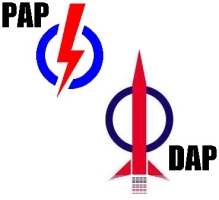