STL has always been amazed by the way the good people at Malaysiakini have been able to lie through their teeth and get away with it. The opposition crazy portal, which hilariously claims to be neutral, has gone from bad to worse as GE13 gets closer.

On Labour Day, BN friendly NGO Persatuan Sivik Gabungan India organized a Tamil concert for people living in the Gelang Patah area. According to the Malaysiakini reporter who covered the event, the turnout was 500. See the snapshot of their report below:

Now, STL was lucky enough to get a few photographs of the event which was also attended by Gelang Patah BN candidate Ghani Othman. Readers, judge for yourself – was the crowd 500 or 5000??

The blatant lies in Malaysiakini have reached an embarrassing level.  We do not know whether to laugh or laugh harder!! 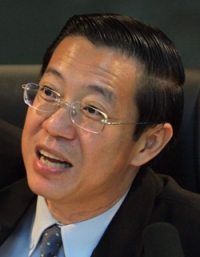